Let me start by telling you that I’m not cool. I am also not a nerd or a geek, which turns out, are pretty cool people. Nope, I fall solidly into the dork category. So why is this dork writing about the first years of Duluth’s Homegrown Music Festival? Because I was there. 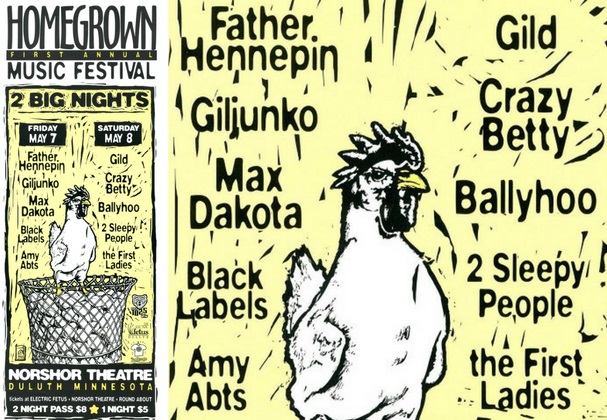 I was at the first one, the second one, the third one and almost every Homegrown since its inception twenty years ago. What started out as date nights with my boyfriend, soon became a tradition that was an important part of my Duluth experience.

I met people that, to this day, remain some of my favorite humans in the world. These are the most talented, raw, imperfect, authentic and interesting people in Minnesota. Some were the musicians who played at that first Homegrowns, and some like me, were just witnesses.

My recollection of the first Homegrown was also my first time at the NorShor. I was standing alone at the top level of the NorShor’s Mezzanine watching the people with their tattoos, piercings and layers of mismatched clothing from the Goodwill Vintage Sale. The stink of cigarettes, spilled booze and patchouli wafted around in the humid air of the century old theatre. Everyone was having a great time and I knew I was privileged to be in that scene on that very night. There was something about it. It wasn’t First Avenue, but it felt like Duluth’s version of it, and it seemed more hip than me, to say the least. Below me, two guys were downing a litre of Jagermeister and others were shifting positions, getting ready for the next band to play — who incidentally became my second favorite local band of all time, Giljunko. I gawked in wonder at the large mural, characterizing gangly sailors, one with a spoke from the ship’s wheel aiming right into his groin — interesting place for sure. Did a girl from Fridley belong here?

The next year, I saw the Black Eyed Snakes at the NorShor. And although it wasn’t my first time seeing my favorite local band of all time, it was the most memorable. The intimate venue allowed for a clear view, but also meant there was limited space for dancing. I became part of the self-proclaimed “Chair Girls,” standing up on the seats of some old steel legged chairs, with the palms of our hands pressed firmly against the wall so we could shake our hair so wide that we couldn’t turn our necks right or left for most of the next week. Oh man, it was a blast.

Then there was the year I brought my old dad to see the Snakes so he could enjoy the kind of rock music he loved so much and had introduced me to as a young kid. I was sure he’d be as hooked as me. “It’s too loud,” I think he said, but I couldn’t hear him because, well…

In the last decade or so, most of us original Homegrowners have had families and work lives that prevent us from getting out into the Duluth music scene as much as we used to. But every year at Homegrown, we open the Field Guide and circle our favorite bands and put together our weekly schedule so we can see those bands and musicians who made Homegrown what it is today: Father Hennepin; BES; The Little Black Books; Low; Giljunko (sigh)… and for one week out of every spring, these Homegrown nights become a reunion of old friends.

Happy birthday to DJ Starfire and thank you for starting the most authentic music festival in the Midwest. I look forward to seeing many old friends, whipping my hair around and witnessing a very cool city. Oh, and Lumpy G, if you’re reading this,

Patrice’s advertising agency, Swim Creative, has helped Homegrown over the past several years in building a new website and in making the original chicken logo and brand consistent across all mediums. Swim enjoys working on projects that enrich Duluth’s design and music culture and elevate the Historic Art District (HART) that Swim calls home.

Ready to Homegrown? Check out their schedule and let’s party. Pregame by bingeing some of the Swim Team’s favorite artists that have played Homegrown throughout the years:

Who are you excited to see this year? Tell us in the comments!