Using the tools of creative writing in advertising

Modern media options have exploded, giving advertisers and their agencies a seemingly endless buffet of options with which to share their message, product and services. But there is something fundamental about the work that hasn’t changed. Not in a hundred years. Not in a thousand years. Not ever.

Human beings always have — and always will — crave stories.

While fiction writers have several hundred pages, screenwriters and playwrights several hours, advertisers typically have, at most, thirty seconds to get their message across. On the other end of the scale they are allotted a mere handful of words glimpsed on a billboard as a driver zips past.

The result of these restrictions? In bad work it’s a focus on information. Data, statistics, facts and figures. But, in good work it embodies the moral of that Hemingway story of dubious origins and even more dubious truth. As it goes, Hemingway — he of the short, declarative sentence — was challenged to tell a full, emotional and satisfying story in six words. After thinking for a moment, he scrawled the following on a cocktail napkin:

Just because we work with smaller frames does not mean we can’t fill them with full, colorful and engaging stories. It just means we have to write first with a pen, then with a scalpel. We have to boil our words down into a concentrated syrup that packs a powerful punch. We have to avoid mixing metaphors, like I just did up there.

For a story (and an ad) to work, you need three things: Protagonist (hero), goal (what the hero wants to achieve or where they want to go), and an antagonist (what or who stands in the way of our hero achieving the goal). Those three key ingredients combine to create conflict.

For instance; this is not a story:

I was hungry for sushi. So I walked down the street to the sushi place and had sushi.

I was hungry for sushi. But, when I started to walk down the street to the sushi place, a sinkhole opened up in the earth. I would have to find my way around to get to my Yellowtail roll.

Ads require these same essential ingredients. Frequently, one or more of the roles is left off the ad, hovering in the background, unspoken but felt. Many times design takes up the mantle of getting across one or more of these roles. For a perfect example of both of these things in action, check out this McDonald’s ad:

So simple, so clean and so striking. But also a complete story unspools in your mind as you look at the ad: 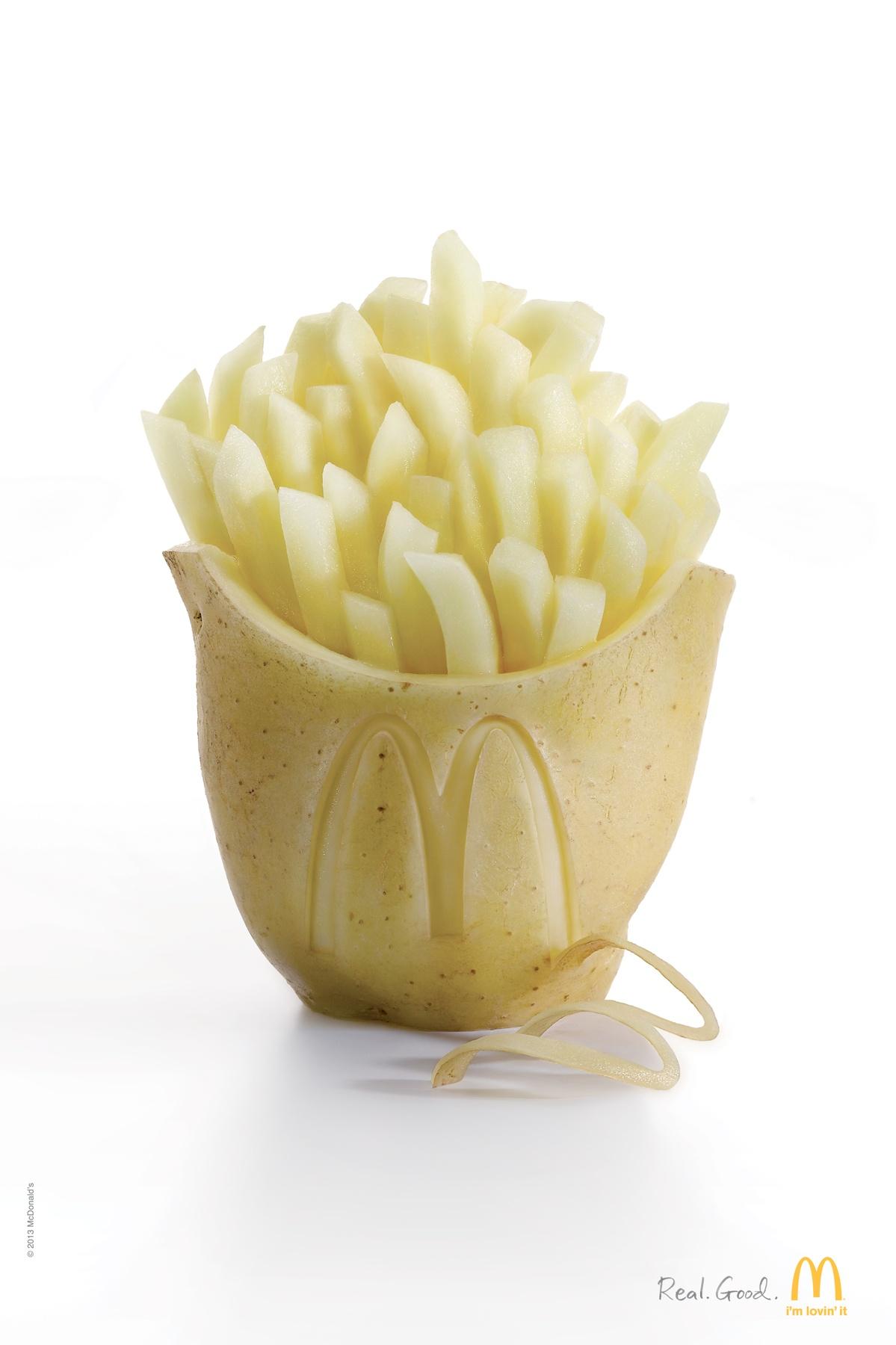 I want to eat better. I want to eat real food, not chemicals. But I have no time to cook and real food is so expensive. But now McDonald’s is selling french fries that are made with better, simpler, real ingredients. I really can have it all! *cue triumphant music.

One tip to consider when structuring your story: it’s rarely as effective when the company is the protagonist. Make your customer the hero. Your customer wants something, but they are being kept from their goal by someone or something. And what you’re selling can help them vanquish their antagonist and reach their goal.

Copywriting is storytelling. Hopefully I’ve established that much. But, if you’ll allow me to throw a metaphor curveball at you, copywriting is also soup-making. You start with your stock; the essentials above. But then you make it your own, pulling out whatever herbs and spices you think this particular batch of soup needs to be the tastiest it can be. In this case, our herbs and spices are techniques used to provoke emotions. That’s where things like humor, surprise, curiosity come into play.